Demand for face masks is getting higher because of the outbreak of COVID-19 pandemic since January, 2020. At first, Taiwan’s government organized the “National Mask Production Team,” constructed 60 production lines as quickly as possible and successfully increased daily production to ensure enough supply of masks from 1.88 million to 13 million a day .

Furthermore, to prevent the short supply of masks, the Executive Yuan announced the “Real-name Mask System” : 3 pieces of mask can be bought per person weekly with the price of the mask being regulated by the government. “Real-name Mask System 2.0” allows the people to order masks via an online platform, thus saving them time for queuing.

This policy was reported by the foreign media with the hope that their governments would follow Taiwan’s footstep. As for the “Real-name Mask System 3.0” , which started on April 9, people can buy nine pieces of mask fortnightly. Until now, everyone in Taiwan is able to have enough masks to protect themselves from the virus. With increased productivity, President Tsai Ing-wen declared on April 27 that based on humanitarian considerations, Taiwan will donate 10 million masks to countries which suffered severely from COVID-19 pandemic.

In Taiwan, it is common to see people wearing masks when they are sick, or when the air quality reaches hazardous level. People will also wear masks because of personal reasons. Now almost everyone wears a mask in public areas such as MRT stations, streets, shopping malls and schools since the outbreak of COVID-19. Because of this pandemic, we have observed that Western people don’t have “face mask culture” like that of the Asians.

Government officials or experts in Western countries have heated debates on this issue: “Is it necessary to encourage all the people to wear masks?” From their perspectives, only the sick people need to wear masks.

Barège, a French student, said she really dislikes wearing a mask because she felt uncomfortable; but she still wears it to be in line with the policy in Taiwan. Moreover, she admitted that the situation in France made people unable to think about whether wearing mask will be uncomfortable or not, because all the medical staff of local hospitals face the crisis of mask shortage. Most people aren’t able to buy any mask in these emergency situations.

Irina, a Russian student, said masks are also unavailable in her country. She agreed that healthy people need to wear  masks too. She said, “People may not know that they have already been infected and could have transmitted the virus to others. ”But her friend Kate objected by saying, “In my opinion, the wearing of masks is not required for healthy people. People with symptoms of illness should wear masks to protect others. Also, those people who take care of the sick, for example, should wear masks at home, as they can be infected. ” Kate thought that people can protect themselves from COVID-19 infection by taking vitamins, or even using nasal spray.

Besides, Martino, who is an Italian, totally agreed with the policy of wearing masks, because he thought this action can help him to protect himself and others.

Martino said when the outbreak of COVID-19 in China occurred, he knew that there would be a global panic, because there were still plenty of flights between China and Europe every day.  It made him feel confused that the Italian government didn’t implement any policy to prevent the outbreak of COVID-19. The first step taken by the Italian government was to shut down the school and ban local students from attending school. However, their students, who were supposed to be in school, went skiing in the mountains or went on a trip. As a result, people who ignored “social distancing” exacerbated the situation in Italy.

Martino believed that when the Italian government decided to close the  school from the beginning, they should shut down all the public areas at the same time; otherwise there would still be a risk of people getting infected  in the country. There are many flaws that the Italian government need to fix to prevent the failure of its epidemic prevention policy from happening.

Besides the misjudgment of the order that “prohibited flights but not banned personal activities” the airport quarantine and the entry isolation of the epidemic areas also haven’t been fully implemented.

These mistakes contributed to the failure of epidemic prevention policy. Moreover, the passengers in the pandemic areas entered Italy through multiple transfers; so it is difficult for the Italian customs to track the transmission of the virus and couldn’t lock the high-risk groups in time.

The customs of Italy is also one of the reasons that brought about the rapid  spread of COVID-19. Moreover Italy is a passionate and family-connected nation. In fact, many carnivals were still held and large number of people gathering together have become hotbeds of the virus.

France is also in a very serious condition now. At first, the French government insisted that wearing mask was useless for the general public, and might even have an adverse effect. In fact, the French were not informed of the virus incubation period, and to top it all, people were infectious when they were asymptomatic.

To make things worse, the masks in the pharmacies have almost been bought and stockpiled by Asians who were aware of the outbreak of the virus . After the French government finally noticed the severity of the situation, there was already a problem with the inventory of masks. Only then did the government collect face masks urgently to ensure that the supply was enough for health care providers.

The concept of “masks are for people who are sick” is usually correct; but this is not applicable in the outbreak of COVID-19. With a long incubation period, many virus carriers do not know that they are confirmed cases. “Wearing a mask as a preventive measure” does not only protect oneself, but also others. The French government believed that the WHO and China, in their early remarks and data reports, led the world to a misjudgment. This is an international level error and unfortunately has caused the world to bear the consequences.

Maybe it’s because the virus is really being underestimated, or maybe it’s because of the unwillingness of the governments to cause panic among the public which in turn resulted in the outrageous off-control of the situation. However, all these phenomena showed that the decision makers are indeed overly negligent.

Meanwhile, let’s take a look at some countries’ policy in time of the crisis. Irina said the borders between Russia and other countries were almost closed with long-distance traffic in Russia being reduced. In addition, especially in Moscow and other large cities, there is quarantine. Most people work remotely and can go out only on certain important occasions. In small towns “soft measures” were introduced: people can leave their homes but they cannot go to public or crowded places.

A report from Rainsford said that in Russia, the harshest legislation in a series of law is that, if a coronavirus patient breaks the rule of isolation and cause others to die, he or she could be sentenced to seven years in prison. Besides, people who violated home order may face a huge fine. If someone disseminates misinformation and spread fake news about the pandemic, he or she would be sentenced to almost five years in prison. The parliament also agreed to give the government the power to declare an emergency decree, and allow the government to implement their new rules and restrictive measures at suitable time.

Taiwan as a Role Model for Other Countries

When asked what country reported Taiwan’s successful pandemic prevention decision, Martino said that there was a report about the policy of Taiwan in dealing with the pandemic. In fact, Taiwan is a role model around the world. Because of SARS in 2002, there is good experience for Taiwan to face this deadly disease. The SARS outbreak resulted in 346 confirmed cases with 73 deaths. After the deadly outbreak, Taiwan already formulated policies and plans for the prevention to protect its people against the next pandemic.

Moreover, Taiwanese generally believed what the government said, and they will follow the rules and anti-epidemic measures set by the government, so there is less panic among people in Taiwan.  Barège, who is from France, mentioned that their local radio reported Taiwan as a role model in this pandemic and that the French government can also learn from Taiwan’s experience. On the contrary, Irina from Russia said that there are only foreign reports from China, Europe and the US. Martino and Barège thought it’s unusual to see people highly cooperative with their government. Since March, the Italian government has already ordered quarantine, but citizens still found excuses to go out.

“You can see people chatting in the park or public areas, ”Martino said. But now both Italy and France set relevant fines for violator. If people go out without any excuse, they will be fined around 2,000 EUR for the first time, and the fine will increase if that person is a repeated offender.

The outbreak of COVID-19 makes us realize some of the cultural differences between Western and Oriental countries. Regardless of these cultural differences, if we want to get through these difficult times, we must all show self-discipline and cooperate with our governments. We sincerely hope that the COVID-19 pandemic will be ended as soon as possible. 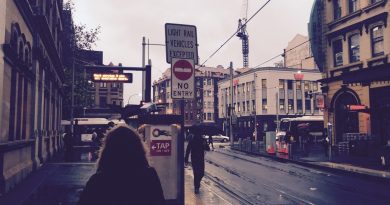