There are many kinds of live streaming （直播）, including internet band program, ordinary person live show, game streamer（遊戲實況）, electronic sports（電競賽事）, and selling goods, etc. Each type has its own special structure and incentives to audiences. Why is live streaming so popular now?

Anchors interact with their audiences in several ways: through chat room, holding irregularly lottery prizes activities, taking audience requests for songs, opening second channels of communication between anchors and audiences (like Line or other social media), fans meeting, call-in and playing online game together. In order to attract and keep audiences, anchors of ordinary people live shows are focusing on personal talent and appearance. Some anchors already have basic fans in one of the fields. Game streamers are focusing on players’ great skills and reactions. However, there are no absolutely effective ways to gain and keep fans. Rather than copying others, it would be better to create one’s own irreplaceable strengths, like personal features.

Asked if business operators are worried about the challenges created by live streaming , Luo Hao Feng（羅皓丰）, founder of PikoLive （皮克直播）said they are not very worried because various businesses still do not and are trying to combine their own industry with live streaming. As there are more and more new ways of live streaming, it is promising actually.

From PikoLive’s newest investigation data, people aged between 18 to 24 account for 56.88% of live streaming activities, those aged from 25 to 34 account for 38.05%, and those in the 35-44 age group, 3.30% only. Males account for a whopping 95.59% whereas females represent 4.41% in the live streaming industry. The statistics prove what Wang Chih-chien （汪志堅）, director of E-Business Center （電子商務研究中心 ）and professor at the Graduate Institute of Information Management of National Taipei University has observed that people have more leisure time as the social structure changes, and people are getting higher education, even at graduate level. People are seeking more exciting and interesting ways of amusement. Because of more mature and cheaper internet environment, live streaming has become one of the most popular ways, especially to teenagers. Adolescents tend to pursue good-looking stars and the opposite sex. Some of them who spend much more time online than average are called otaku（宅男）.

Another live streaming feature is letting the users feel like being in a virtual situation. Take goods-selling for example. Anchors often demonstrate how to use products to audiences. People will be influenced by other users because of the sense of obedient to the public （從眾性）. The next step of forming fixed audiences is to induce the audiences to keep using it. But live streaming still do not have any legal restrictions on violence and drugs content. The only way currently is to enhance public figures’ sense of social responsibility on the internet. 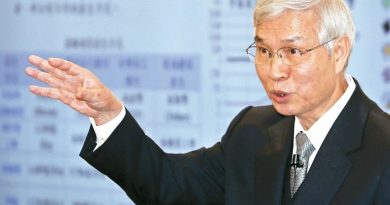 No Need to Panic about U.S. Rates Rise