In Taiwan, there is a group of people who get their hands dirty doing manual work and devote themselves to public construction, but few people seem to appreciate their contributions and some people even despise them—they are the blue-collar workers.

Lin Liang-rong （林良榮）, assistant professor of the Institute for Labor Research, National Chengchi University, points out that mass media could affect the values of society. He gives an example:  a NHK(日本放送協會) TV show called 《プロジェクトX ～挑战者たち～》（X計畫：挑戰者） tells stories about how those unsung heroes support Japanese economy from all walks of life.  In contrast, Lin said, Taiwan’s news media usually show respect to powerful entrepreneurs or those in the upper class and rarely mention the devotion of blue-collar workers, so people often define a person’s value by his or her fortune, and ignore what blue-collar workers have contributed to society.

“Utilitarianism is advocated in Taiwan,” said Lin.  Credentialism is popular in our country. The purpose of receiving education is to join the higher class or  becoming a member of the elite. Education is supposed to be an opportunity for lower class people to have social mobility, but it seems to have become a stumbling block for them nowadays. Students, often unconsciously influenced by the educational system, focus their efforts on pursuing a higher degree in order to achieve a higher socioeconomic status（社經地位） , like doctors or professors. It seems that the blue-collar labor is an unimportant career in Taiwan.

“I would like to suggest reforming our educational system,” said Lin. Educational reform is the most important step that government should take. First, our education should let students understand that each career has its value. Blue-collar laborers play an important role in building our country. If nobody did the manual work, all industries in our society cannot  operate smoothly. Second, the outline of Labor Standards Act（勞動基準法）should be introduced in high school civics class. Many countries have already done so. It is all for students, so that when they graduate from school, they will fully understand their rights as an employee. 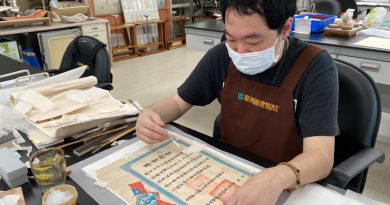