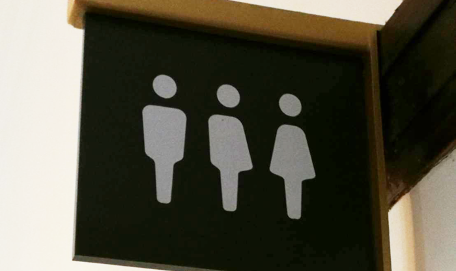 What is unisex toilet?

“When I enter a unisex toilet, I often feel a sense of disdain radiating from people around me. At times, I feel quite embarrassed,” said Lu , a senior studying in FU JEN Catholic University. Lu is transgender and believes that he has a female soul trapped in a male’s body.

A unisex toilet is a public toilet that everyone can use regardless of gender. These toilets are usually placed together with simple stalls or compartments and are designed as separate rooms for individual privacy.

In Taiwan’s current open-minded and progressive society, people enjoy absolute freedom of speech and have the right to choose their gender preference. People, through elections and protests, fight for equal treatment of people who identify as homosexual, bisexual and transgender, and for their rights in society. However, despite the progress made in recent decades, the voices of both supporters and opponents remain evenly matched. This difference of opinion also extends to universities, and whether campuses should set up unisex toilets that meet legal provisions or not.

Mr. Chang’s whose daughter will be studied in SHU. As a parent, he is concerned about his daughter’s safety. He questions whether the university has taken adequate precaution to prevent people trying to take advantage of the particularity of unisex toilet to commit a crime, such as rape, indecency, or assault. Hu Chien Ming,a student of Tamkang University also shares the same skepticism. “Only when the male toilet is full or if I am personally in urgent need will I consider using a unisex toilet. I’m really worried about being labeled myself, because people generally discriminate against transgender individuals in our society,” Hu said.

Ms. Xu, who used to be a kindergarten teacher, advocates for unisex toilets to be set up in all schools, including primary schools, as children’s opinions are formed from an early age. “When I was a kindergarten teacher, the kindergartener’s toilets were shared by both sexes,” she said. “Children’s thinking of gender is simple because they are still young. They only feel curious about reproductive organs, so teachers have to teach them on how to respect the uniqueness of each and every one of us, which is valuable for them to learn.” She would also put all the student’s toys together, allowing the children to play with both robots and dolls regardless of gender. That being said, by putting different genders’ toilets together, everyone can also use them, without discrimination.

In 2017, the National University of Governance tried to set up gender-equitable bathrooms. However, Li Ming, president of the State Council stated that there were too many complications in the draft proposal. He also suggested that the first gender-free toilets must be installed at the international airport and MRT station, as this would set a strong precedent for other institutions and public spaces and increase respect gender equality. Ming said the National University of Governance would continue to promote gender and individual equality until a more adequate proposal can be drafted.

Safety of unisex toilets must be taken seriously

Shih Hsin University (SHU), located in Taipei, is famous for its communications department which provides a liberal environment to accommodate the various needs of students.

SHU set up the first unisex toilet on October 26, 2011. This measure was enacted not only to help students who have gender dysphoria but also to resolve the problem of long queues in women’s toilets. However, there are still doubts and criticisms.

Important reason why unisex toilets should be set up

According to the Flying Fish Club of SHU, most people have already established their gender identity when they are college students, and it is important to recognize that sexual identity and gender identity are two different issues. In today’s society, many people still continue to frown upon others who cross-dress, which often causes these individuals to doubt and think negatively of themselves. Thus, unisex toilets are necessary steps towards solving such a problem by helping transgender individuals avoid judgement from the community and thus relieve some of the pressure they may experience.

From a professional point of view, Liao, a psychotherapist, thinks that the safety of children using toilets is an important reason to install unisex toilets for kindergarteners. Many kindergarten’s toilets aren’t gender separated, not because of gender issues that are at stake but for the children’s safety. Children have vague concepts of self- management and self-care, that’s why safety is more important than privacy. The purpose of installing unisex toilets in kindergartens is to ensure safety.

Liao believes gender diversity as a concept is gradually established before adolescence. From third to fourth grade, many children’s sexual characteristics, such as menstruation and nocturnal emission will show gradually and some children might begin to think, “I don’t really like to be a boy or a girl.’’ Children in this stage need to learn how to face these sexual characteristics and also how to interact with people who have such characteristics. “Understanding and familiarizing with these sexual concepts is a necessary preparation for adolescence,” Liao added.

However, as a psychotherapist, Liao also believes that it is necessary to set up unisex toilets in universities. After puberty, children can control their behaviors such as gender identity, sexual orientation, and boundaries between genders. It is unfair to all genders if the restrooms are only for male or female. Liao stated that the question of who should use the unisex restrooms is a question that has always been ignored by people.

The existence of unisex bathrooms only makes sense when it is built in a gender- friendly environment. Otherwise, it might send a message to some people that the person using it is not the same as everyone else. There are many schools that combine unisex toilets with accessible toilets nowadays. The accessible toilets are designed for those who are in need or suffer from a disability. Besides space saving, this combination can solve the problem of what unisex toilets should focus on when they are being designed.

According to Global Gender Gap Report of World Economic Forum, Northern Europe ranks among the top five among all countries in the world. For example, the concept of gender equality has been formed since childhood in Sweden and can be seen everywhere. Almost every public and private facility in Sweden is unisex. When asked whether they feel uncomfortable or not, Swedish men and women were reported to find the question quite strange, as for them, it was normal and commonplace, why would they feel uncomfortable?

their American and French counterparts. Many schools in the United Kingdom also believe that having unisex toilets can reduce maladaptive behavior such as bullying, vandalism, and smoking in toilets. In fact, a middle school in Manchester set up its first unisex toilets in 2000.

According to a report in ‘TIME’ magazine issued in January, 2016, more than 150 universities in the United States have established unisex toilets. In April, 2015, the White House also announced its decision to set up unisex toilets in the Eisenhow Building, expressing its acceptance and tolerance for the LGBT community. In recent years, the issues of gender-friendly environment have become more and more prevalent, not only in the open-minded Western world, but also in Asia, Thailand, Hong Kong and China as these countries set up more and more unisex toilets.

Opinions continue to differ on the installation of unisex toilets. Respect and safety are both issues to be addressed when people use unisex toilets. Only in a gender friendly environment when respect for gender diversity prevails can we treat unisex toilets as a first step toward gender equality.

Antiquated profession makes a comeback in a modern fast-paced life