Humans have a desire for perfection, including appearance and body shape. People go to the gym for different purposes: some for losing weight, some for shaping up, and others for enjoying exercise.

“I think, fitness is the most cost-effective investment, ” said Luo, Chong-yu （羅崇瑜）, a man who has worked out for more than a year. He was 114 kg and 50% body fat, but now he boasts a standard body shape, having lost forty kilograms in about four years. Losing weight only with diet control is not an appropriate way, so he began to exercise. He keeps going to the gym three or four times a week for an hour. In the process, many people have seen his changes, which makes it harder for him to implement weight loss projects. For example, he met with some difficulties such as becoming lazy or the weight didn’t change, but he would still try to break through them. It can be seen as a psychological challenge of fitness for him.

The fitness coach, Ryan, who has worked in a well-known chain gym for more than seven years, started workout because of he used to be very thin and didn’t want to be considered weak. Ryan said, “Most of people may be very concerned about their weights, but the real point is the body fat. Lowering the body fat is not easy, so doing aerobic exercise (有氧運動) and weight training together is necessary. ” Moreover, the hardest part of any exercise is to persevere, and we need to have the correct concept first, so we can effectively achieve the goal we set for our body.

Though the benefits of workout projects are increasing lung capacity, muscle endurance and preventing osteoporosis （骨質疏鬆）, no one should be mocked for their physique. Everyone has the right to determine their appearance. But if you want to pursue health, fitness is worth a try! 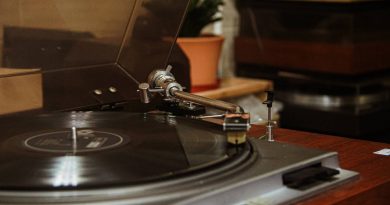 Falling in love with Vinyl Records