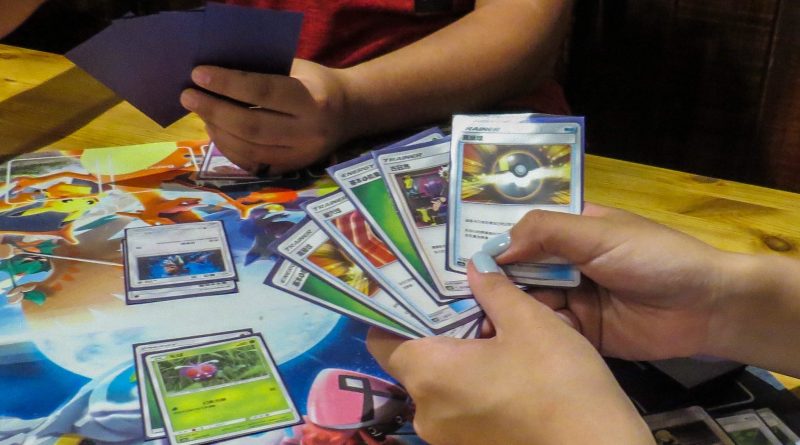 In Taiwan, “Trading Card Game”(TCG) is usually considered a symbol of violence , nerdiness and childishness. Therefore, some Taiwanese parents forbid their children to play TCG, since they think these games would bring negative impact to their children and could cost them huge amount of money. However, with the kind of TCG and the scale of the players growing these years, many Taiwanese, even some parents, change their mind when it comes to TCG.

TCG is a type of board game that exists for about 30 years. Players buy “card packs”(卡包) to collect the cards and build their own deck(牌組). Then they use their favorite cards to engage in battle with others, with each games generally lasting for twenty to thirty minutes. Sometimes players also trade their cards after the competitions.

However, with the uneven randomness in the card packs, players usually buy a lot of card packs in order to get the cards they want. So, many intent players deliberately hype the price of some cards to earn money. Moreover, some players even sell cards as acareer.

As a result, some rare cards are ten times more expensive than ordinary ones. Besides, TCG publishers launch a new kind of card pack every month, with the contents totally different from that of last month. All of these things resulted in the most significant problem of TCG : players especially children spending too much money on these games.

Generally speaking, one card pack with 15 cards in it cost NT$ 100. However, a formal deck requires at least 40 cards, which means that players need to spend at least NT$300 to start their first game.At the same time, these 45 cards may not be formed as a playable deck.

“The cards are too expensive,” said Stevim Maco, mother of a teenager. “If one single card costs NT$ 1,000, many parents will not allow their kids to play such games, since other board games cost only NT$ 500.”

“If players wish to build a strong deck, they need to buy many rare cards, which may be very expensive. I think some students with minimal means may even steal others’ money to buy cards, so as to satisfy their ambition of victory,” said Peily Chen, a player with a young child.

Besides the high cost entails in playing TCG, many Taiwanese also easily associate card games with violence. Not only do some cards look very spooky, their impressions associated with violence mostly came from a bloody tragedy that happened in Taiwan.

In 2014, Cheng Chieh, who went on a stabbing rampage in Taipei MRT that killed four people, hung a Yu-Gi-Oh card(遊戲王卡) on his neck as an amulet in his attack of innocent people. At that time, people found that the card Cheng Chieh carried was “Blue Eyes White Dragon”, which is the most famous and the most powerful Yu-Gi-Oh card, and one that looked brutal and had high “attack point”.

After that tragic incident, many TV hosts and psychologists associated Cheng Chieh’s antisocial personality with his hobbies, which include playing violent video games, watching bloody movies and Yu-Gi-Oh card. As a result, many Taiwanese abhor these “nerdy” things even more. The problems caused by these games also come to the fore, since nobody want their children to become killers when they grow up.

Deeksha Liu, who works for Taipei Juvenile Detention House for years, indicated that Cheng Chieh’s case can be traced back to a wide range as it can also be discussed in many aspects, such as school, home, and the society. However, games involving sexual content and violence can really make children become more fierce and aggressive, and less willing to help others.

Liu said that she once encountered an adult who couldn’t return to real life scenario after playing the video games. “If the games can affect an adult like that, could you imagine what would happen to an innocent child?” Liu said. She also added that the media not video games has drawn a greater impact on children who tend to imitate people projected on TV. Liu also said that the games of competition will lead children to have a competitive mentality, which will make them focus on distinguishing victory from defeat.

In Liu’s opinion, since teenagers could be easily addicted to these games, the games may reduce their sleep time, cause distraction, make them unresponsive, and even affect their memory. Lack of exercise and long-term indulgence in games will also lead to obesity. Therefore, Liu believed that helping children cultivate a good hobby is important so that they can come into contact with nature and enjoy more leisure activities.

Liu also said that such situation is hard to avoid with the main reason being parents nowadays are too busy, so they tend to use smart phones and games as tools to appease their children.

To solve these problems, Liu said that there are hundreds of board game nowadays, with some of them allowing players to express their opinions. These games are useful in training children’s ability of communication and social skills. In addition, compared with other games, these board games are more educational.

“Moreover, games can divert attention, so children can relax,” said Liu. “On the other hand, children also show their advantages in the game and find self-worthiness. Therefore, games have many favorable effects on children.” Liu thought that what parents should do is to restrain their children’s playtime and choose the type of the games for them. She also suggested that parents can choose cooperation-related games to allow their children to cultivate altruism and cooperation.

For outsiders, playing with a sheet of paper may not be interesting at all. But to the players, the interactivity of the games, the design of cards and the complexity of rules are what that make them crazy about the card games.

“It does cost me a lot of money on buying card,” said Tse-nan Chen, a member of Shih Hsin University Card Hobby Club. “However, I have strong passion in the cards, so I don’t mind spending money on them.”

Chen said that playing card games requires a player’s logic, ability of strategizing and cleverness. “Whenever your opponent takes an action in the game, you would have a chance to counter it. On the other hand, your opponent could do so, too. It is all about how quickly you can think. Moreover, know your enemy and know yourself for it will lead you to victory.”

There are seven phases in each turn and at least five time spots in each phase in Yu-Gi-Oh card. Besides, there are generally more than ten types of the cards in only one deck. Therefore, players have to “think more than twice” before they engage in every single game.

As for the negative effects of card games, Jim Liu, who has worked in a board games store for seven years, believed that the cause of the Cheng Chieh’s incident has many factors, not necessarily directly related to card games. He pointed out that card games are rarely accused by people. He also indicated that card games are no different from other types of entertainment. Without over-indulgence, it would not be harmful to any one.

Another employee, Alan Wang, believed that most card game players have strategic traits. When they meet good players, they will learn from each other and ask others for help. The entire playing process will not be detrimental to the growth of one’s mind. Unlike electronic devices that provide information unilaterally, these games can also stimulate children’s thinking ability and allow them to learn logic and rules.

As for parent’s concerns about the their children’s addiction to card game, Wang pointed out that everything has addictive components. Some people enjoy the excitement of drawing cards, others will be delighted when they get rare cards. If you play games moderately, the chance of being addicted is relatively low.

Although it is hard to persuade parents to believe that these games are safe, Wang said that the staff of the board games store will try to find a suitable game for the customers so that they can all enjoy it.

Not All Parents Hate Cards

In recent years, card games are no longer considered as a bad thing for many families. Since many young parents are born after the TCG was invented, so they are more open to these games. In fact, some of them even play games with their children.

“I think children can learn about getting along with people of different ages, cultivate quick reaction capability and learn the importance of respect for strong opponents,” said Linny Lin, a young mother. “These experiences are difficult to learn in school,”Shinshin Wu, a mother with a young child, also shared her opinion. She thought many card games not only help children to train their concentration or math skills, but also give them some time to relax. “I think playing card games can boost their mind too,” said Wu.

Although some tragedies have happened that could cause misconception of card games and the high cost that people have to pay in buying card packs, which made people regard card games as a demonic temptation,it goes without saying that if we play card games in a healthy and abstemious way, it is something worth trying!