The Mysterious Origin Of Tarot Card

When people come across problems or hardships in life, they will seek different ways to determine their future and how their problems will be resolved, including “tarot,” a set of 78 cards with pictures on them used to shed light on one’s future. Nowadays, tarot has become very popular due to its mysterious qualities. Yet, despite its curious and perplexing nature, tarot is not intangible. In fact, it is quite easy to comprehend and many people rely on tarot cards to find direction in their life.

The origin of tarot cards is as mysterious as their use, with many different opinions about their true origin. According to Astrology Club at Shih Hsin University, there are three aspects to consider when discussing the origin of tarot cards: The “origin of wisdom,” “origin of structure,” and “origin of moral.” The origin of wisdom is attributed to either ancient Egyptian or Hebrew culture. Those who support the Egyptian origin view argue that the pronunciation of tarot is similar to the ancient Egyptian word for “mysterious journey” whereas those arguing that tarot came from Hebrew culture point towards the fact that when the spelling of tarot is reversed, the resulting word’s meaning is similar to “God” from the Hebrew Bible.

The second aspect, the origin of structure, refers to the way the cards are divided. The cards and divination were spread throughout Europe during the Middle Ages. The cards came in many forms, the majority of which were poker and tarot cards. However, the Minor Arcana used in tarot and Suit cards were derived from Asia, with some versions indicating that tarot may have actually originated from India or China.

The third aspect is the origin of moral. When Arabic Solitaire was spread to Europe in the late 14th century, it had developed into 58-card deck. Later, it combined with another 22-card deck called “the trump card” to become the modern day 78-card tarot deck. The trump card from Northern Italy was the earliest set of tarot cards. These cards reflected the European Feudal system. This evidence seems to point towards tarot was originated in from Europe.

Although tarot cards seem relatively commonplace these days, this was not the case during the conservative Middle Ages in Europe. During this period, Christianity strictly forbad divination or fortune telling. Groups that continued to divine did so secretly in small groups. It was not until the 21st century, along with the rise of psychology that tarot card was spread to Europe afresh as a popular form of divination.

Can Tarot Actually HEAL Your Soul?

Today, people use tarot cards to predict their fortune in day-to-day life. For many, tarot is not just a form of divination, but also a way to explore themselves. “I think tarot cards can heal my soul, I can hear a voice in my heart and my soul when using the tarot, telling me my fortune,” April Liu, a junior studying at Shih Hsin University who has used tarot frequently, said.

The Predictability Of Tarot

According to Astrology Club of Shih Hsin University, most students who frequent their club to read tarot cards ask questions concerning their relationships, as school life is inseparable from school work and interpersonal relationships.

Single people want to know whether they will meet a suitable partner in the future. Those who have infatuation for a particular person will attempt to determine whether they will have a chance to be together. People who are to enter the workforce, on the other hand, tend to read tarot cards to divine issues related to marriage, work, and their career. They may ask when it is the suitable time for marriage, whether they should change jobs or if their career will be successful or not – all with the hope that the divination will provide a reference for their future.

Few things you should know about tarot

When it comes to tarot cards, there are several taboos to be noted.

First, don’t ask questions about health. Due to the advancement of modern medical technology, physical health should not be diagnosed by a diviner, but by a doctor. Although health cannot be divined, the doctor’s medical skill can be divined, so a person may use tarot cards to help determine on an appropriate doctor to visit.

Second, tarot cards cannot be read from 12 o’clock midnight until sunrise. The reason for this is because human activity ceases during the night time, and therefore cannot be divined. In the past, before electricity became commonplace, this taboo existed from sunset to sunrise. Nowadays the time period has been shortened to reflect changing cultural and social practices, and divination is forbidden after 12 o’clock midnight. The other reason for this taboo is related to people’s mental condition, people can’t read cards when they are not mentally stable due to sleep deprivation or exhaustion.

Third, don’t ask about the past. Past events are set in stone and can no longer be changed. Further, don’t ask what would happen if you choose other option at a certain moment in your past, because even if you ask, you can’t change the facts of the past and would just feel more upset.

Fourth, don’t ask questions concerning the privacy of others. As these problems are not directly related to the questioner themselves, they cannot be divined. For example, if the questioner wanted to know details about their ex-partner, they would be unable to, as their ex no longer has anything to do with them. It is irrelevant to ask about another unrelated person’s current life. While questions about family are acceptable, it’s still best to divine for yourself.

Fifth, don’t divine the same thing continuously. If the divination does not change in the short term, the result will not be changed. However, if you continuously divine the question in order to increase your chance of receiving the answers you desire, then the divination becomes meaningless.

For many, reading tarot cards is not a superstitious way of determining their future. Rather, it’s one of the many methods they use to solve the problems in their life. After all, who doesn’t want to get a glimpse of the future of their relationship, career or work? Tarot may help the questioner to clarify the nature and solve problems by encouraging self-reflection. It may even provide them with some helpful ideas and options to consider when seeking direction to prevent a situation from getting worse or even when making decisions about significant life events. Who knows, maybe it can improve your current situation? 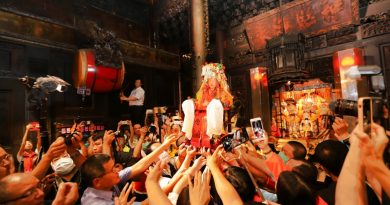